The railway track was built under the project of building a Grain Terminal Zabaikalsk
Photo by the Trans-Baikal Territory government press-service
"In February, a broad gauge railway was constructed from the terminal to the junction at the Matsiyevskaya station, earthwork operations at the grain terminal are nearing to the completion as well as the construction of an administrative building," Alexander Yashchenko said.

Thanks to the railway terminal in Zabaikalsk, 235 new jobs are to be created. The total investment is 6.6 billion rubles.

The grain railway terminal will be dealing with the grain exports to China. The grain, legumes and oilseeds transshipment volume will be up to 8 million tons per year. The volume of the terminal one-time storage will be up to 80 thousand tons of grain. The project is being implemented within the Trans-Baikal priority development area.

Earlier it was reported that the grain railway terminal project is unique in terms of its volumes, it has no equivalents both in Russia and abroad.
Source: 75.ru 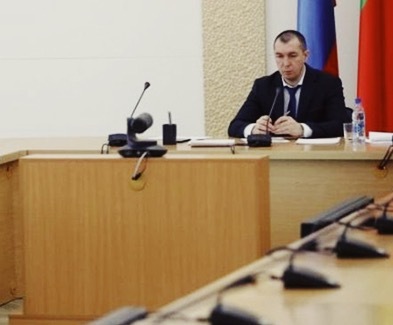