НОВОСТИ
03.02.2022
Railway Grain Terminal in Zabaikalsk is to be launched in 2022
The first grain railway terminal in the village of Zabaikalsk is planned to be commissioned in the second half of this year, said Denis Bochkarev, regional Minister of Agriculture.
"The construction of the terminal is now being performed on a 24/7 basis. As of today, the assembly of the administrative building has been completed. Construction of two foundations are at the final stage for grain crops storage tanks, and equipment is being assembled at five silos. Four foundations of elevator towers are also ready. Moreover, the construction of the railway depot has been completed and preparatory work has begun on laying tracks in the depot. We expect the terminal to be launched in Q3 2022," said the head of the agricultural ministry.

He also said that as of today 90 containers of the main process equipment of the terminal have been delivered from China to Zabaikalsk. Another 100 containers will arrive soon.

Apart from this, the Grain Terminal Zabaikalsk has started implementing the "Construction of a network of linear elevators in the regions of Siberia, the Far East and the Urals" investment project. A land plot for the construction of an elevator on the territory of the Shilkinsky district is being selected now, and negotiations are underway with agriculture products manufacturers of the Trans-Baikal Territory on managing of the contract farming.

The grain railway terminal will be dealing with the grain exports to China. The grain, legumes and oilseeds transshipment volume will be up to 8 million tons per year. The volume of the terminal one-time storage will be up to 80 thousand tons of grain.
Source: 75.ru 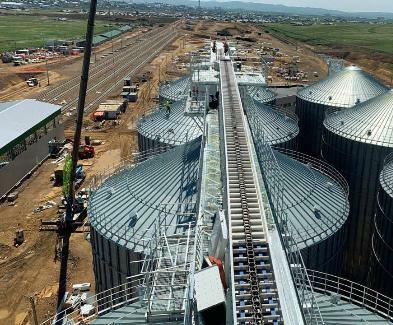