“WEF Forum is a dominant platform for presenting the vast economic opportunities of the Russian Far East and the projects that are being implemented here to the international investment community. It is an excellent opportunity for a mutually beneficial dialogue: the event brings together leading representatives of the public sector and the business representatives from Russia and foreign countries. The territory of the Far East is one of the places of “power” for our state, and we, in turn, are proud that our project for the development of the export component of the Russian agro-industrial complex is one the priority projects for the country as well as part of the program of Far East development," "NLGC" CEO Sergeн N. Pushkin commented on the event.

The "New Land Grain Corridor" Сompany presented to the participants of the WEF its project to create and develop a full-fledged infrastructure for the production and export of grain and oilseeds from Siberia, Far East and Urals to China and countries of Central Asia. The key element of the project is the railway Grain Terminal Zabaikalsk currently undergoing construction in the Trans-Baikal Territory, the commissioning of which is planned by the company in the third quarter of 2022. On the territory of Transbaikalia, it is also planned to create one of the 7 Main Linear Grain Elevators, constituting a common network which will provide the Corridor with the planned transshipment capacity of 8 million tons per year.

The project aroused interest of major Western players of the grain market. A number of preliminary cooperation agreements with companies producing grain and oilseeds in the territories of the Far East south and Siberia were also reached.

“During the exhibition, we managed to examine a whole range of issues related to strategic partnership, attracting of investments for the project, selection of new land parcels for the construction of Main Linear Granary Network,” said Sergey Nikolayevich Pushkin, General Director of NLGC LLC.
Source: nlgc.ru 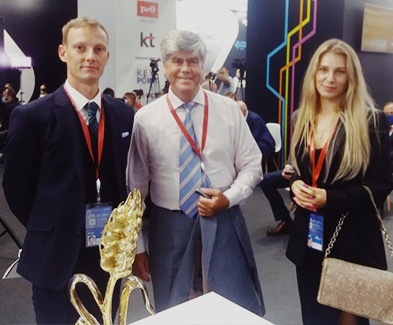