Russian gold exports may spike
In fact, the «New Land Grain Corridor Russia — China» is the shortest and most profitable route for delivery of Siberian agricultural products to Chinese markets. Its creation was initiated by the management of the Grain Terminal Zabaikalsk, which, however, also remains just a project.

— All conditions have been met: examinations have been carried out, infrastructure has been formed, also by the Chinese party, — emphasized General Director of the Terminal Karen Ovsepyan. — Until 2017, the project implementation was progressing at a fairly high pace until the Chinese partners tried to gain full control over the terminal. We managed to avoid it. Otherwise, we would have lost the control over a strategic facility of vital importance.


As estimated, about eight million tons of grain every year will be supplied to China through Zabaikalsk Railway Terminal, and the one-time storage volume will be up to eighty thousand tons. It should become the end point for collecting large export lots, and several terminals accumulating grain on the way to the Middle Kingdom are planned to be built along the Trans-Siberian Railway.

— Everything that is planned within the framework of the project is conceived taking into account the existing infrastructure. But the railway carrying capacity is limited, so storage volumes need to be increased. Only in this case a uniform year-round exports can become possible. There are many export directions, and the terminals and elevators being created will work for different supply channels, — Karen Ovsepyan confidently claims.

Excluding intermediaries
Presidential Plenipotentiary Envoy in the Siberian Federal District Sergey Menyaylo recalled about the formation of the consortium of grain producers and processors in Siberia. It has already engaged eleven enterprises from six regions of the Federal District. Such an association will make it possible to consolidate large cargo consignments, look for new sales markets, and defend the interests of Siberian agricultural producers.

How to assist Omsk farmers in organizing exports
— Our harvest volumes are not as large as in southern regions of Russia. Granaries remained since the Soviet Union times, and new ones are almost not being built. With an increase in yields, their shortage is always noticeable. Another problem is the grain purchase prices. When the yield is low, prices rise, and decrease when yelds, stressed the Plenipotentiary Envoy.

In 2018, Siberian farmers harvested about fifteen million tons of grain, including 9.5 million tons of wheat. This year, weather allowed to start sowing campaign earlier, today it is proceeding at a faster pace, and the harvest is expected to be no less compared to the last year’s figures.

But when exporting products, another problem arises: there is a whole chain of resellers between agricultural producers and the final grain purchasers, moreover, several companies are also involved in transportation. Each intermediary receives its share. Final purchasers are not interested in the relatively small purchasing volumes that farmers can offer separately. The existing scheme forces the grain producers to bear the losses themselves. In order to provide them with the maximum benefit possibility, it is necessary to collect big amounts of grain without participation of a large number of intermediaries.

Siberian regions will get a chance to establish direct relations with China’s largest food corporation COFCO within the framework of the St. Petersburg International Economic Forum already in June of this year. To manage this, the Plenipotentiary Envoy instructed the heads of the constituent entities of the Siberian Federal District to calculate the volumes of grain they can guarantee to supply to the market of their eastern neighbor.

— All agricultural producers that became or are ready to become the consortium members must provide this volume for sure. Then we will be able to discuss the purchase price. In addition, while we still do not have a single large terminal, we need to understand where this grain can be stored and dried, and how we can ship it, — Sergey Menyaylo noted.

From everybody according to the ability
The regions that traditionally collect impressive harvests are ready to enter the agreement with COFCO and participate in the creation of a grain transport corridor to China. According to the Deputy Governor of the Novosibirsk Region Alexander Dubovitsky, domestic grain consumption in the region is equaled to 1.7 million tons, with the surplus between 300,000 to 1.1 million tons. According to preliminary calculations, Novosibirsk farmers will be able to export about 600,000 tons this year.

Why does the Altay Territory lose a quarter of its export earnings
— Further growth of grain production is constrained by the low profitability of the industry, — explained the Vice-Governor. — The profitability of production over the past three years decreased from twenty-eight to eight percent and then to five percent. We are well aware about the export potential of the Novosibirsk Region, and it is no coincidence that last year our traders increased the volume of grain export by six times compared to 2017. Relations between our producers and foreign partners are also developing.

However, traders sometimes dictate conditions that are far from favorable to farmers, and not all Siberian regions are rich in harvest. For example, the Kemerovo Region is still expecting 120 thousand tons of exported grain, the Republic of Khakassia is ready to supply about 70 thousand tons to the «common pot», but the Tomsk Region has nothing to present at the June negotiations with COFCO. But nevertheless this does not mean that the Region can be excluded from the exporters of agricultural products.

— We strive to export value-added goods abroad. This year, for example, we opened a rapeseed processing plant and have already begun shipping oil to China. When the enterprise reaches its full capacity, we will start shipping at least three hundred tons per month. It is difficult to import and promote finished products in China. But if plans include construction of additional terminals and elevators, then now it is necessary to look for opportunities to sell flour and other grain processing products.
Source: rg.ru 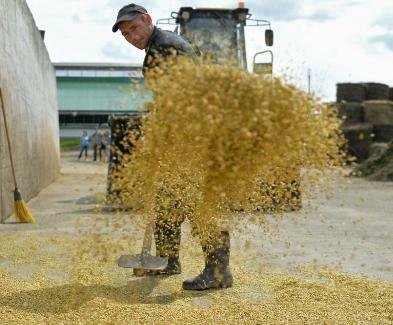