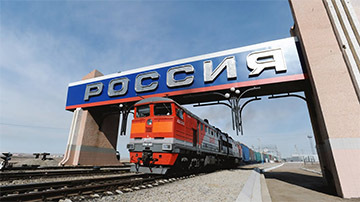 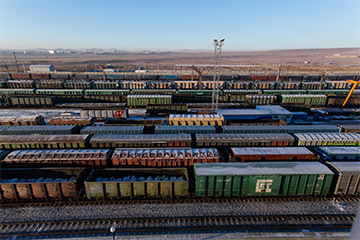 Today Zabaikalsk station has a complex railway interchange, undergo constant reconstruction and development, is an target object of significant state investments, within the framework of the Comprehensive Plan for Trunk Infrastructure Modernization and Expansion for the Period until 2024, as well as in terms of development of transit opportunities for China-Europe- China container transportations and programs for the diversification of transport and logistic routes as part of the conjugation of the Eurasian Union and the Silk Road Economic Belt.

The reconstruction will reduce train processing and clearance time and increase the capacity of the Zabaikalsk RRCP.
Zabaikalsk station is located in the same named Zabaikalsk village, located in the Transbaikalian district of the Transbaikal Territory. The village foundation dates back to the period of construction of the Kaidalovskaya branch of the Siberian Railway, the 86th siding, constructed in 1900.
The entire accompanying infrastructure consisted of a service room and two residential buildings where the railway workers were housed.

1901
A new stage in the station development started in the 1930s - a number of tracks were built, as well as a delta for turning manoeuvre of steam locomotives, a hydraulic pump, a goods depot, a goods stall, a bakery and a small power station.

1930s
In the 1940s, the station's capacity was expanded to 12 and 16 pairs of trains.
1940s
In the 1950s, the existing station outlines, transfer points, rail car rearrangement point and a new railway terminal were founded.
1950s
CORPORATE
SERVICES AND RATES
FOR SUPPLIERS
CONTACTS
About Us
«NLGC» Group
State Support
Information Disclosure
Transshipment services
Additional services
Enter into a contract
Purchased goods and services
How to become a Supplier
+7 3025 120 989
info@sibgrain.ru
1 в, Pesochnaya st.
TPD "Transbaikalia"
Zabaikalsk" urban-type settlement
Contact Support Team
All information posted on this website can be used only with the permission of the copyright holder— «GRAIN TERMINAL ZABAIKALSK»
+7 3022 550 888
Login to your personal account
We're sorry, the Personal Account is not available at the moment.
We are already working on troubleshooting